The University of South Australia dominated the recent UniSport Australia Online Cycle Series, winning an overall gold and silver medal along with a number of individual medals.

Held over six weeks via the Zwift platform, universities across Australia competed on virtual race courses from around the world – from the Knickerbocker route in New York to the Greatest London Loop in the UK and the Bologna Out and Back in Italy.

After having the most number of registrations of all universities around Australia, Team UniSA finished a top of the final men’s standings, while the women’s just missed out on an overall win, placing second.

Those results were largely thanks to the efforts of UniSA students Chelsea Holmes, who won the individual female student gold medal and Callum Pearce, who won the male student bronze medal, and UniSA staff member Diana Hodge, who earned the female staff/alumni gold medal.

Holmes won four of the six races and finished in second place the other two.

In week five on the Bologna track, Holmes not only finished first in the university rankings but won overall, beating over 120 other cyclists who were competing from around the world.

The Bachelor of Human Movement student said the event enabled her to show she is a contender in Australian cycling.

“I was super happy with my results,” Holmes said.

“I got third the two weeks before Bologna in the overall race, so I was really hoping to get up there at some point and in the last 200 metres at Bologna I caught a breakaway rider to win, so it was really exciting and I was really happy with that.

“The online series has really helped to put my name out there and it's given me a solid sort of foundation where I know that I can compete with some of those girls on the same level.

“I wouldn't normally have the experience of racing against them from the comfort of my own home, usually I’d have to spend a lot of money traveling interstate to race against them, so it's been really great to be able to compete against them more regularly and see how add up in comparison.” 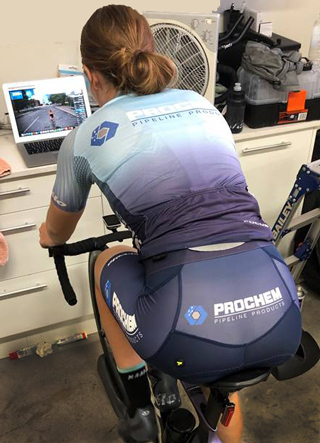 In the men’s event, there was a big group of UniSA riders that competed with each other every race, led by the consistent Pearce.

Pearce, who rides for Australian based UCI team Oliver’s Real Food Racing while studying a Bachelor of Industrial and Applied Maths, loved competing each week with his mates who were all stoked to come away with the overall win after some tough competition with RMIT University.

“It was actually pretty cool because there’s quite a few cyclists that go to UniSA and we are all good friends,” Pearce said.

“Each week we were talking to each other before the race and we were trying to push everyone, especially because it was quite tight between us and RMIT for the majority of the series.

“The last few rounds, we were getting super competitive and we wanted to beat them and I think everyone got pretty motivated by that, so it was great to see in the last round that we pulled away and ended up smashing the overall standings.”

When Hodge joined in for each race of the series, she thought she was just helping get some participation points for UniSA.

The Online Course Facilitator – Digital Media, UniSA Online was “blown away” when she found out she had won the overall medal.

“I was totally stoked, I didn’t realise there were individual awards; I thought it was just a team thing and that I was just chipping in some extra points to help the team win,” Hodge said.

“I have only been riding for a couple of years and I found the races really hard – I don’t think I have ever pushed myself so hard in anything physical before!

“So, I was pretty darn happy with myself and happy that UniSA students did so well, and I loved the chance to represent the Uni.”

Any UniSA students who are interested in competing should fill out an expression of interest form on our website.

As a UniSA Sport Club & Events member, you have access to more than 25 sporting clubs, campus programs and events, student representative teams and community events.